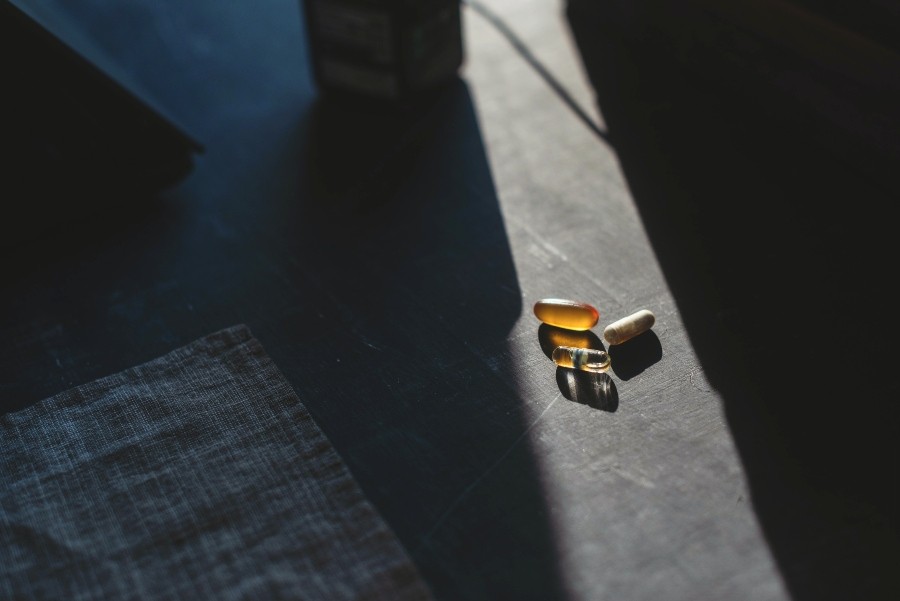 You've probably heard a lot about the importance of including omega-3s from fish oil in your diet, but you might not know exactly why fish oil is often touted as so important, how it plays a key function in your body and how to choose the best fish oil.

We spoke with Michal Silbermann, a Nutritional Therapist and Education Manager for Aqua Biome, a sustainable fish oil and omega-3 supplement brand from Enzymedica UK, to find out.

In short, yes. Fish oil is good for gut health. While probiotic supplements are often considered the go-to solution to help support a healthy microbiome (the symbiotic ecosystem in our guts comprises trillions of microbial cells), restoring the gut requires more than just supplementing with good bacteria. The long-chain omega-3 fatty acids found in fish oils are crucial for maintaining a balanced and healthy microbiome.

In the last decade, the scientific community has revealed remarkable discoveries about the human microbiome. Our endocrine system (hormones and circulation), neurotransmitter (nervous system) function, immune health, and our entire physiology are impacted and controlled by these organisms which call the gut their home. These microbes influence our health in many different ways, including the way we metabolise food, how we feel, and even how we look.

Our microbiomes are like fingerprints, totally unique to each person - no two individuals share the same composition, not even twins. Modern lifestyle and the use of medications, overly processed foods, stress, pollution and over sanitisation can disrupt and negatively impact our gut microbiome.

Maintaining a healthy gut is key to your body's overall health, and fish oils, along with other nutrients, are a big part of that maintenance equation.

What Is In Fish Oil That Is Good For Gut Health?

The omega-3 fatty acids in fish oils have been demonstrated in a number of research papers to have anti-inflammatory effects in the gut.

In addition, there is wide evidence that those same fatty acids provide health benefits for the brain, eyes and cardiovascular system, where inflammation can be the precursor to many different chronic diseases including: obesity, cardiovascular diseases, rheumatoid arthritis, inflammatory bowel disease and depression. Because of these benefits, fish oil supplements have become some of the most popular food supplements on the market.

Ground-breaking new research has established another exciting health promoting effect of essential fatty acids: omega 3’s ability to influence our microbiome. Microbial diversity is highly influenced by omega-3 supplementation. DHA (Docosahexaenoic acid, a type of omega-3 fat) can help to increase the natural levels of Bifidobacterium and Lactobacillus as well as keystone bacteria species, such as Akkermansia muciniphila. Furthermore, omega-3 may support the integrity of the intestinal wall, improve interactions with host immune cells and influence the gut-brain axis through gut microbiota compositional changes.

Why Have Most Of Us Never Heard Of DPA?

DPA is less well known than DHA and EPA because of fish oil extraction technology. It is only with the recent advances in purifying fish oil that it has become possible to extract consistent and standardised levels of DPA along with the more well-known and utilised EPA and DHA. This has led to an increasing number of research studies into the effects of DPA in the body.

It is now understood that DPA acts as a reserve for both EPA and DHA in the body. DPA can be thought of as an intermediary between EPA and DHA in the metabolic pathway and can convert easily to either depending upon individual needs. The body preferentially stores DPA, as it is less easily oxidised and its shape (as defined by its double bonds) when incorporated into the cell membrane has a different effect on the molecular organisation than EPA or DHA. 40% of the omega-3 fatty acids in human breast milk are in DPA form, probably for this very reason.

Including a standardised amount of DPA in a fish oil supplement allows the body to improve its omega-3 status more quickly. One study showed that supplementing DPA alongside DHA and EPA for just 14 days increased tissue omega-3 levels by 63% as compared to 41% in those not receiving the DPA.

DPA research has found a number of additional benefits of this type of fatty acid, namely:

While the science of how to influence the gut's ecosystem, the microbiome, is still in its infancy, there is a pattern that is emerging. It focuses not on probiotics, but rather how to influence the terrain of the gastrointestinal tract. The growth of microorganisms in our intestinal tract is a lot like the planting of grass. If the lawn is overrun with weeds, competing grass types, and the soil is poor or arid, all the grass seed in the world is not going to produce a lush green lawn. The focus should be on improving the terrain first to ensure the desired change in the microbiome.

It appears that the important factors to promote that proper intestinal terrain include omega-3 fatty acids, specifically DHA. To achieve the most profound effect on the microbiome and to maximise its anti-inflammatory influence, the ideal ratio of the three key omega-3 fatty acids (DHA:EPA:DPA) appear to be similar to that found in wild salmon. This ratio is consistent with producing a microbiome profile that supports lower inflammation and obesity, improved metabolism and better blood sugar control, as well as conferring all the other well-known benefits of fish oil supplementation.

Studies have compared various ratios on their effect on inflammation and found that DHA is more effective than EPA in modulating specific markers of inflammation as well as blood lipids. DHA appears to be the key omega-3 for influencing the microbiome.

However, including DPA enables the body to easily store omega-3s in the tissues and organs, converting to DHA or EPA when needed. Higher serum DPA is also correlated to lower C-reactive protein (CRP) in men – high levels indicate inflammation which could be due to an infection or a disease like cancer.

Some population-based trials have also demonstrated that higher levels of DPA are also associated with lower triglycerides and cholesterol and a lower overall risk of coronary heart disease and atherosclerosis. DPA has also been shown to enhance DHA’s ability to promote cognitive function in both infancy as well as old age and to improve EPA’s ability to repair damaged blood vessels, highlighting their synergistic nature.

There are four main types of omega-3 fatty acids:

They can be found in different foods, in varying quantities.

Fish and other seafood, especially cold-water fatty fish, such as anchovies, salmon, mackerel, herring, and sardines, are the top sources for EPA, DHA and DPA.

Food manufactures often fortify specific foods with omega-3, such as certain brands of eggs, yogurt, juices, milk, soy beverages, and infant formulas, due to its importance in the diet (and depletion from the average western diet).

What Kinds Of Omega-3 Dietary Supplements Are Available?

Omega-3 dietary supplements can in a few forms, including:

They all provide a wide range of doses and forms of omega-3s. Whilst omega-3 are found in high levels in certain foods, processing and cooking affects the levels and quality of these vital fatty acids. Furthermore, most studies in humans demonstrated that though some conversion of high doses of ALA from plant sources to EPA occurs, the conversion to DHA is severely restricted. Omega-3 supplementation is an excellent way to ensure sufficient intake of essential fatty acids.

How Much Fish Oil Do You Need?

Adults should aim for 1,000 mg to 1,200 mg daily of total fatty acids. For inflammatory and other therapeutic indications, this dosage can increase to 2,000 to 3,000 mg per day – though you should always speak to your pharmacist, doctor or health practitioner for your own specific health requirements.

There is an ongoing debate in the industry as to which form is better absorbed (fish oil/ phospholipids/ triglycerides/ ethyl esters) however, absorption is only a part of the equation. The bigger question is “Which form of fish oil can produce clinically relevant results?”. The answer is all the forms, but the concentration is the key. For best results use the highest quality (cleanest purity) fish oil that will provide at least a 60% concentration of EPA/ DHA/DPA.

Why Is The Source Of Your Fish Oil Important?

Due to the vast amount of pollution in the oceans many fish oils are highly contaminated. So the extraction and purifying technology used in the fish oil industry is of paramount importance. Additionally, for environmental reasons it is important that the fish sources are sustainable.

The Targeted Molecular Enrichment Technology (TMET) used by Aqua Biome allows the removal of more toxins than any other fish oil extraction method. As well as being certified by Friend of the Sea, the Aqua Biome fish oil range is Clean Label Project certified and tested for over 150 industrial contaminates, including lead, cadmium, arsenic and mercury.

The Aqua Biome fish oil range is the most innovative, pure, and unique product in the fish oil market to date. Enzymedica has formulated the very first fish oils designed to support a healthy microbiome, keeping high levels of the very long chain fatty acids needed to promote healthy guts.

Recent research suggests that high DHA levels are important for maintaining and supporting keystone organisms in our gut, which is why we keep our levels higher than most fish oils. Common fish oil manufacturing processes also reduce DPA content, ours does not.

Sustainable fishing is an important consideration given the current climate crisis. We only use highly sustainable fish (Peruvian anchovetta) that carry the Friends of the Sea certification. Enzymedica is very passionate about our environmental impact and partnered with MOTE marine laboratory for the renovation of Florida Keys coral reefs, the third largest in the world!

You can find out more about Aqua Biome and their products on their website. If you're ready to get some new fish oil supplements in your diet, you can browse their range of products (all available for home delivery).

The products offered are not intended to diagnose, treat, cure, or prevent any illness or disease, or to replace the advice of a medical professional. Results are not guaranteed and may vary from individual to individual.

Any questions? Call us now on:

Or email us at: