Be the first to review this product
Special Price £12.84 Regular Price £16.05
Add to my wishlist
In stock
FREE DELIVERY on all orders over £15
You earn 12 reward points when you buy this product

Directions:
As a food supplement for adults, take 1-3 capsules daily with food. Do not exceed stated dose unless directed by a healthcare practitioner.

Keep out of reach of children. Store in a dry cool place.

Food supplements should not be used as a substitute for a varied diet. Not recommended during pregnancy or breastfeeding unless on the advice of a healthcare practitioner. If taking prescribed medication, consult a physician before using this product.

Read More...
Full Product Information
Skip to the end of the images gallery 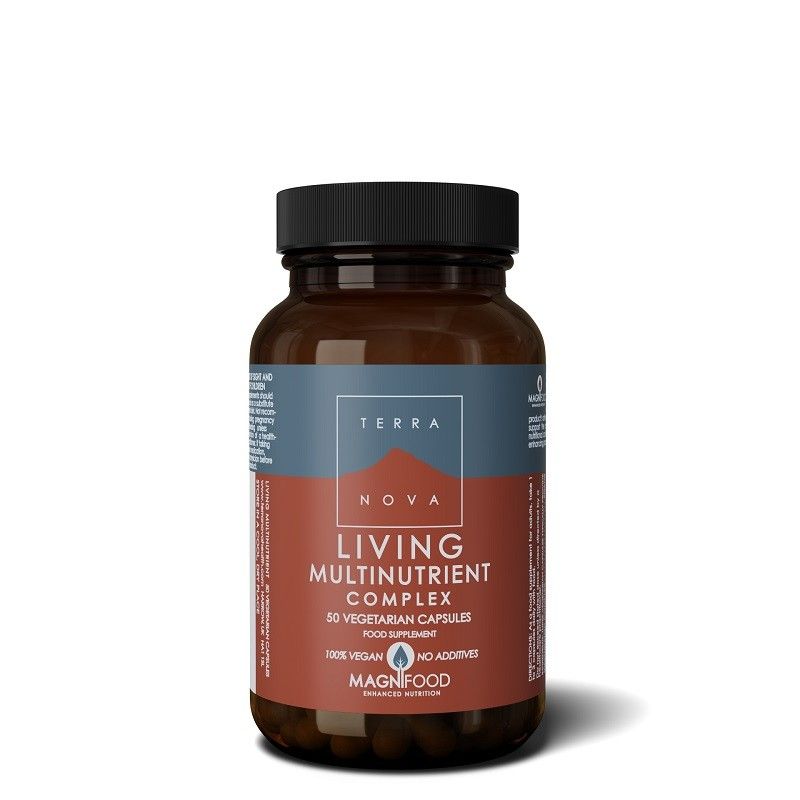 Skip to the beginning of the images gallery

What is Magnifood?
Each Terranova nutritional product is enhanced with its own synergistic complex of botanicals and phytonutrient-rich foods, called Magnifood. Magnifood ingredients are combined in a manner which enhances the body’s biochemical environment in order to maximise the potential benefits of the product’s vitamins, minerals and/or other nutrients. Many of the plants used in Magnifood are fresh freeze dried. Research shows that fresh freeze drying has the unique ability to retain a plant’s enzymes, and is shown to be superior to other drying methods in terms of activity, stability, solubility and preservation of a plant’s original fresh chemistry (as it was when the plant was harvested).

Spirulina
Spirulina plankton is one of nature’s richest sources of plantpigments (such as chlorophyll, carotenoids and phycocyanin) and highly digestible protein (typically more than 55%), as well as providing vitamins, minerals, fatty acids and other compounds vital to life (i.e. the powerful antioxidant enzyme superoxide dismutase [SOD]).

Stabilised Rice Bran (SRB)
SRB has one of nature’s highest concentrations of the vitamin E-related compounds tocopherols and tocotrienols, as well as B-vitamins, fibre, essential fatty acids, minerals and more than 100 different antioxidant compounds (such as alpha lipoic acid [which also recycles antioxidants such as vitamins C and E], co-enzyme Q10 (CoQ10), carotenoids and the antioxidant enzymes superoxide dismutase (SOD), peroxidase and catalase).

Sea Buckthorn Berry & Leaf
A very high content of vitamin E (bothtocopherols and tocotrienols), vitamin C and plant pigments such as flavonoids and carotenoids make sea buckthorn one of the most powerful antioxidant plants ever studied. Sea buckthorn is also noted for its concentration of omega 7 fats, which are less well known than omega 3, 6 and 9, but are highly regarded for their potential health and beauty applications.

Dandelion Leaf
One of nature’s most nourishing plants, dandelion provides an array of vitamins and minerals, as well as carotenoids and many other health-giving phytonutrients. It is also known for its supportive role in detoxification and maintaining a healthy liver.

Nettle Leaf
An excellent source of many vitamins and minerals, nettle is one of nature’s most concentrated sources of calcium, magnesium, boron and iron.

Turmeric Root
In addition to its content of micronutrients, turmericroot is renowned for the antioxidant, detoxification and liver supportive properties of its naturally-occurring curcuminoids.

Green Tea Leaf
Although green tea is an unusually potent source of certain nutrients, such as manganese, it is best known for its high concentration of powerful antioxidant polyphenols – especially epi-gallocatechin gallate (EGCG).

Watercress
A true superfood, the levels of so many important nutrients in watercress range from good to excellent – most notably carotenoids, flavonoids, glucosinolates (which convert into isothiocyanates), vitamins A and C, folic acid, vitamin K, calcium and iron.

Kale
Kale is a good source of many nutrients, with carotenoids and sulphur-rich antioxidants such as sulforaphane and indole-3-carbinol being among the most important.

Blackberry
Blackberries are among the highest ORAC rated antioxidant fruits and are a potent source of anthocyanin flavonoids and carotenoids (i.e. zeaxanthin, lutein, beta carotene and cryptoxanthin).

Write Your Own Review